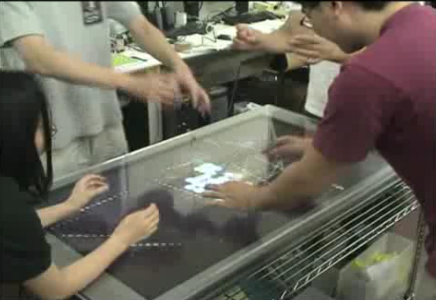 On approach, it looks like an average air hockey table, but this is where the similarities end. The table surface functions as an interactive video game display, wherein the game objective is to shoot little solid circles before advancing to the "big boss" circle. A high-speed camera positioned above the table registers the circle created when a user touches thumb and forefinger together over the table surface. The system then generates a hollow circle for the user to shoot with. The motions are intuitive and simply brilliant - after creating the "weapon", the user shoots by tapping ("pinching") thumb and forefinger together and is easily able to control the speed and direction of shooting. The best part? Any number of people can join in. Each person can create two weapons (or four, if you have amazing toe control). How cool is that?